Posted on October 21, 2016 by beheer
in: Categories: Uncategorized.

Recordings for the Longitudinal Corpus of UCU English Accents have been completed in the spring of 2016. Between Sept 2010 and June 2016, we have conducted a total number of 1095 interview sessions with regular UCU students. (In addition, we collected interviews with exchange students, with teachers, and with all facilitators as interviewees.)

About 1/3 of the UCU Classes of 2013, 2014, 2015 and 2016 has voluntarily contributed to the corpus — an exceptionally high turnout of 285 participants in total. Even more exceptional are the low dropout and high return rates: only 32 of the participants dropped out after their first interview, and 139 participants (49%) completed all five interviews.

To all participants and all facilitators: thank you for your participation!

Figure 1 below summarizes the numbers of interviews broken down by annual cohort (Classes of 2013 to 2016 are numbered C1 to C4) and by month. Interviews were held in September and April of the first and second year, and in April of the third year of study. The number of participants who completed all five recordings is given in parentheses.

Figure 1: Number of talkers in the Longitudinal Corpus of UCU English Accents (LUCEA), broken down by annual cohort and by year/month of recording. The number of participants who completed all five recordings is given in parentheses for each cohort. 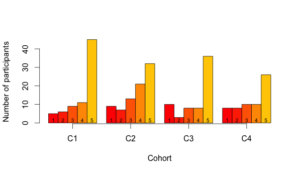 Figure 2: Counts of number of interviews (1 to 5) per participant, broken down by annual cohort. Example: in cohort C4 (Class of 2016), there are 26 participants who have completed 5 interviews.